You may be wondering which form of Chinese you should use when localising your website. Or maybe you’re just interested in Chinese. By reading this article by Philip Philipsen, Senior Project Manager at LanguageWire, you will find answers to both of these questions.

In the old days, people would say “It’s all Greek to me!” if they didn’t understand something.
Today, a more common refrain is that “it’s all Chinese” when something doesn’t make sense. And now, we’re going to complicate this further by exploring the various forms of written Chinese. I say “written” on purpose since there are numerous varieties of spoken Chinese, and those are a whole different ballgame.

Key takeaway: The country or region of your target audience determines which version of written Chinese you need.

A background on written Chinese

Put simply, written Chinese records the sounds of standard Chinese. People commonly refer to this as Mandarin Chinese. It’s the official form of Chinese spoken throughout the People’s Republic of China (PRC), where it’s also known as putonghua or ‘common language’.

Chinese isn’t only spoken in China, however. It’s also an official language in Singapore and Taiwan. In Singapore, it’s one of four official languages. The Taiwanese refer to Mandarin as guóyŭ or ‘national language’, also to reflect certain local differences in wording.

So far, so good. What confuses many people is that there are multiple written forms of standard Chinese. Again, the keyword here is ‘standard’ – because the language spoken language is basically the same despite the different labels commonly used in the language industry.

The three written forms of standard Chinese are:

Which version should you use?

When choosing between Simplified vs. Traditional Chinese, you need to consider the market you want to reach. It's best to think in geographic terms: 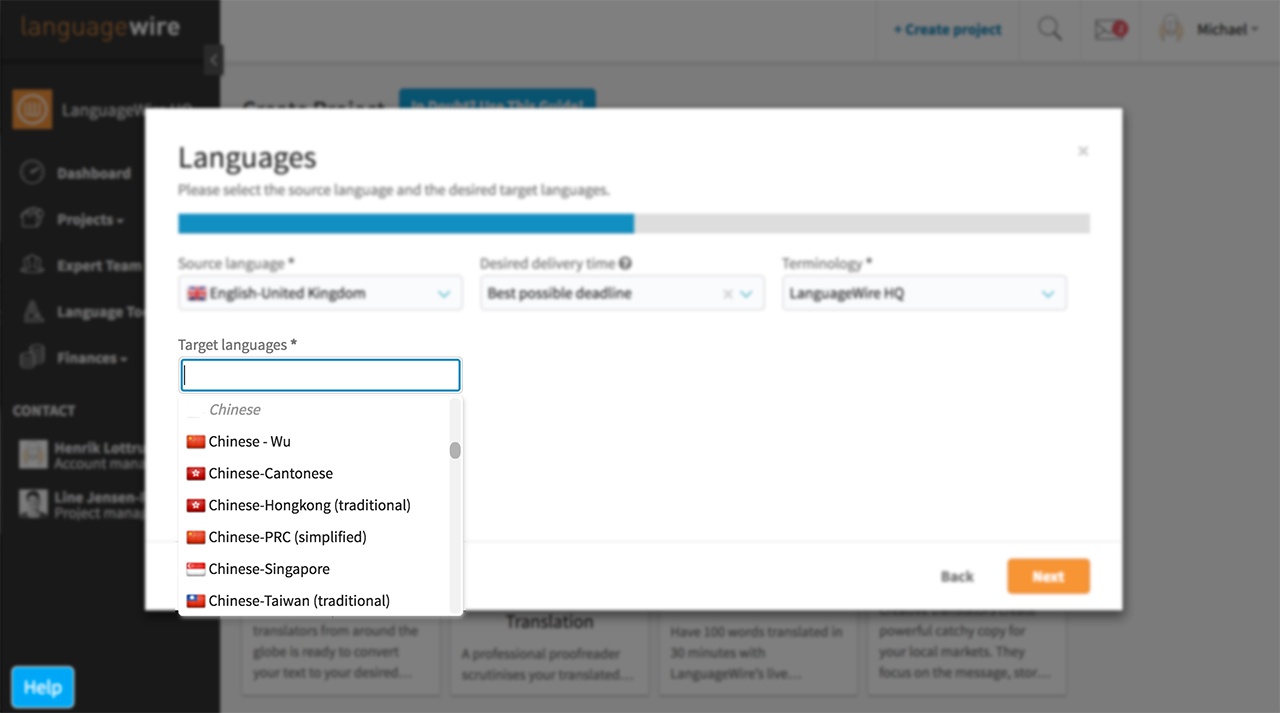 That’s why we specify the locale when ordering Chinese in LanguageWire. It ensures that a native speaker from that region handles the translation and adapts it to fit local preferences. And that’s your goal, to speak like a local with your target audience.

The terms ‘Simplified' and ‘Traditional' refer to the graphic form of the Chinese characters used. At the heart of it, Chinese characters are a syllabic form of writing, and a syllable in Chinese can either be a word or part of a word. So, unlike the alphabet which works at the level of individual letters, Chinese writing records syllables. For example, take the generic term for ‘things Chinese’: zhōnghuá 中华. We have two syllables, zhōng + huá. For our purposes here, it’s that simple.

When it comes to writing zhōnghuá in Mandarin, we have three options. If you count writing in Latin letters, you have four options in fact. Chinese use Latin letters whenever they write digitally – the syllables are just converted to Chinese characters.

So let’s have a look at zhōnghuá:

In each version of written Chinese, the first character is the same, but the second is different. Even though it’s the same word.

The road to Simplified Chinese

Once upon a time, everyone wrote using Traditional characters. When writing by hand, people would often abbreviate characters to reduce complexity. And there’s a long-standing tradition of writing in shorthand simply to speed things up. Take 華 which became 华. Simplified is simply Traditional on a diet.

After the establishment of the PRC in 1949, Simplified was promoted and finally established as the Way to write in the PRC. For newcomers, Simplified characters are easier on the eyes due to the lighter visual load. And for practical purposes, that’s the key difference.

For English speakers, this is somewhat akin to spelling words differently in the UK v the US. Just take a look at ‘aesthetic’ (UK) and ‘esthetic' (US). It's the same word, just written differently. On top of that, there's local pronunciation to contend with. In the US you might hear [es-thet-ik] and in the UK [ees-thet-ik]. And naturally, there are countless local varieties of pronunciation – but just one or two ways to spell it.

The language behind the scenes

There are differences in pronunciation in Chinese as well. Although, there’s a slight difference. Let’s use our example of 中华 / 中華 again:

The reason for the big difference is that a Hong Kong native would be pronouncing this in Cantonese, which is the everyday language for most people in that city.

Cantonese is a major regional dialect and entirely different from Mandarin. It even has its own written representation, unlike most Chinese dialects. It’s possible to fully record spoken Cantonese by using characters that only make sense in Cantonese. If someone writes verbatim in Cantonese, standard Chinese speakers mostly won’t understand more than a few words.

Essentially, Hong Kong natives are bilingual. This means that when they read something in standard Chinese, they’re likely to translate it into Cantonese before, say, reading it aloud to their child at night. So there we have it, it is all about the language being written, and in the majority of cases that is standard Chinese.

That said, speakers of standard Chinese do use different words depending on where they live. Much like the British and Americans usage of the terms ‘lorry’ and ‘truck’. That's why it's important to consider your target audience.

Your first question should be: which country or region is going to read my text? If it’s Taiwan, use a native translator from Taiwan. If it’s Hong Kong, a Hong Kong native is your choice. And if it’s the PRC, well, a native speaker from that vast country is the way to go. That’s how you decide whether to order Simplified or Traditional for your Chinese translations.